On June 18th the kids had their final day of school. Goodbyes were said, well wishes given and a few more, I can’t believe you are doing this, came out. When we arrived back at the boat we had a few last second details to handle and then we planned to get to sleep early for a 5am departure time. That is not how it went. A few friends stopped by for one more goodbye/playtime for the kids. So finally at nearly 11pm we tried to go to sleep.

Both Dan and Ashley were up at 5am and we were underway by 5:30. The forecast called for very light winds from the west so we started our new life under what looked like was going to be 12 hours of motoring out of the Straits of Juan De Fuca to Port Angeles. That is not how it went. We did motor all the way to Port Townsend and were into the Straits by 8:30am. The Straights of Juan de Fuca offered us a chance to sail even if the winds were rather light and the seas lumpy. And what began as a slow sail west quickly became a beat into 5-8ft seas and 30mph winds. After about three hours and 1000’s of gallons of sea water over our decks, we decided that we should just head back to Port Townsend. The idea of backtracking only to cover the same distance again the next day or days later would never have been a consideration in our previous schedule driven life. However our new way of thinking (no schedules) made turning back because it was no longer fun an effortless decision.

We waited out two stormy nights in Port Townsend. When the weather cleared we made our way to Neah Bay Washington to plan our first blue water ocean sailing. Neah Bay is on the northwestern tip of Washington State. We waited for a decent weather window to arrive and made our run to Barkley Sound on the west coast of Vancouver Island.

Our first time sailing in the ocean could not have gone better. We had an average wind speed of about 20knots and seas that were 3 to 8ft swells at about 6-7 seconds. What this means is that it was definitely not calm and relaxing yet it also was not too dangerous or rough enough to scare the kids. We spent all day tacking up the southern coast of Vancouver Island and across Barkley Sound to a beautiful town called Ucluelet where we checked into customs.  The kids did amazing! As I said, it was anything other than a calm day. We spent hours crashing through heavy seas, holding on with both hands and we rose and fell with the swell, and watching for passing ships in the very busy shipping lanes. Victoria and Alexander did just what they needed to do or not do in order to avoid sea sickness. They both moved from the front of the boat where their bedrooms are to the back of the boat into our bedroom early on in the morning as soon as the pitching began. A few hours after breakfast and a movie they both came up into the cockpit saying that they were feeling a little queasy and needed some fresh air and to see the horizon for a bit. They quickly began to feel better and soon we were having a nature spelling bee and reading from our joke books. They spent the rest of the day reading and or playing games. What was most interesting was how they were handling the uncomfortable situation. Victoria handled it by saying how much she loved the big waves and how they made the boat rise and fall and sometimes pound. She said this was fun but there was definitely some concern on her face.  Alexander just calmly said that he did not think that this was fun at all but it did not bother him and he just went about reading is books with little to no reactions. He would just say that it was part of getting to where we wanted to go. Two very different approaches to handling the stress of ocean sailing and they both worked for the two of them.

Ucluelet is surrounded by super dense evergreen forests that go for as far as you can see north, south and east. It lies on the northern edge of Barkley sound and is nestled into a nicely protected harbor with 7000 foot high Ozzard Mountain rising above it to the West. Just outside the bay the ocean surf relentlessly crashes into the many rocks, reef and islets that surround the passage to Ucluelet. We spent one night at anchor just north of town. In the morning we hiked to the other side of town to a beach to stretch our legs and watch the surf pound onto the rocks. Victoria put on a species identification class for her parents at each of the many tide pools. Alexander took this opportunity to work on his rock climbing skills, scaling any large bolder he could find. On our way back through town we stopped at the grocery store to resupply our produce (Canada does not allow you to bring any fresh produce across the border). We returned to the boat and headed out of the harbor sailing our way to a place called Pipestream Inlet and into the wilds of Barkley Sound. 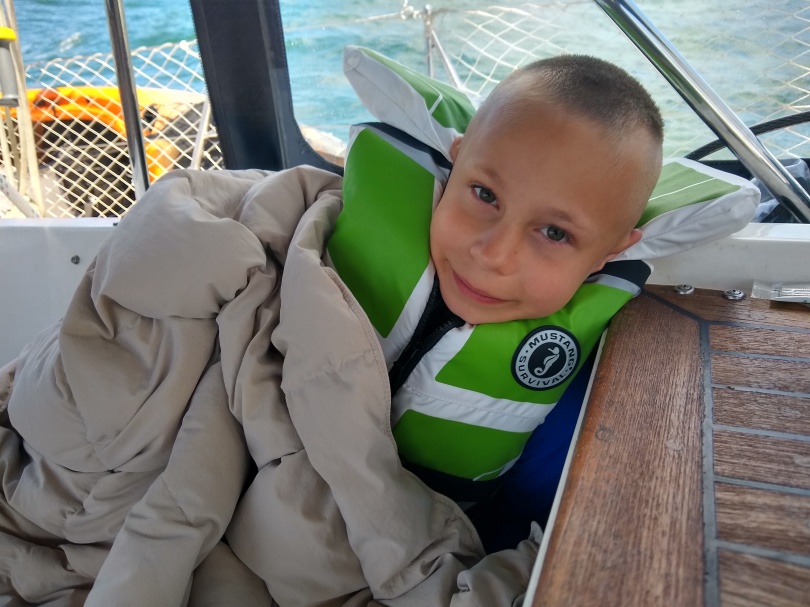