Yesterday when we hiked to Black Lake the kids wanted to trail run. Dan & Ashley had those crazy backpacks so that idea was vetoed. This morning we went back with the grandparents to run the trail. Both kids did great (it’s only a mile round trip but still!) and got to play on the beach afterward. When we returned to the boat we got everything prepped to weigh anchor. We motored over to Tenedos Bay. Often in Desolation Sound the anchorages have ledges where you’ll go from 100’ depths to something more reasonable (30-60feet) backing straight up to a rock ledge. Tenedos is no exception. Our anchor was dropped in 60’, the center of the boat is about 55’ and the back of the boat is 20’ from a rock wall. Between the rock walls and tight anchorages you don’t want to swing on anchor here so the stern line is out keeping our stern snug to shore. Dan’s parents found a spot a few boats from us. After dinner we hiked to Lake Unwin, swam a bit and did a wash up. After returning we went over to the grandparents and played cards with the kids. We had a game of War, Hearts (that was for the grown-ups) and then Crazy 8s. It’s so fun now that they’re to an age that we can play card games with them. 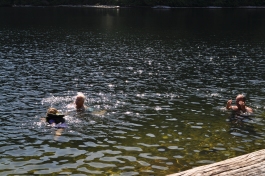 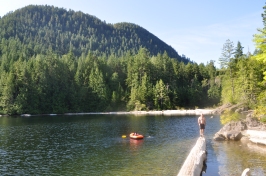 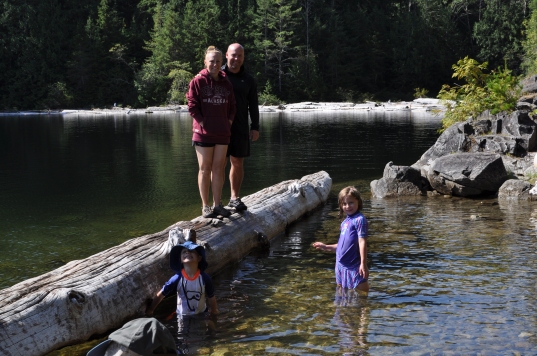 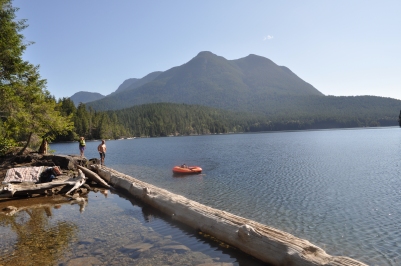 This morning we got up and readied ourselves to go back to Lake Unwin for a fun morning of swimming. You have to hike about half a mile to get to the lake but the access there is a huge log jam. You can hike off to the right to view the lake but there isn’t any good access to the lake where you’d actually want to swim. If you turn off to the left before the lake you hike along the rocky side. There are about 5 or 6 good rocks that you can hang out on and swim off of. We got there early to get our favorite rocks (last time we were here was 7 years ago). Our “spot” is actually 2 of the rocks, with a little bay in between them, joined by a large log. The log across the bay makes for a shallow enclosed pool that is perfect for letting the kids play without lifejackets. Grandma & Grandpa joined us and we got lots of swimming in before it got busy. We were only 1 of 2 groups at the lake when we arrived, when we left there were or had been at least 6 more. The afternoon before Dorothy & Dennis saw 8 dinghies at the trail head. We brought Alexander’s little raft and he rowed around the lake quite a bit (seriously the best $25 investment ever). At one point his oar came apart so Dan had to swim quite a way out to rescue him. Around lunch we decided to go back to Samadhi and give our spot to the next group. On the hike back Ashley bumped Alexander’s raft into a sharp tree branch and it’s slowly losing air. Darn it! Thankfully we still have the other and somewhere we have a patch it. Once the kids were in their beds for nap we got ready to raise anchor and head towards the next spot. We got a bit of sailing in before the wind died due to us being in the lee of an island, we motored till we were out of it, then poled out the genoa for a bit of downwind sailing. Except the wind died again. Oh well. We started the motor and met up with Dan’s parents in Walsh Cove at Waddington channel. Dan and the kids went to explore the little island while Ashley made dinner. After dinner we went over to Dorothy & Dennis’s boat for cake and cards. It was another late night, we didn’t get back to Samadhi until 10:30.