We left Tyee about 730am, beautiful morning on the water. As we approached the mid channel buoy (with 3 sea lions on it) the winds built to 10-15kts. We pulled out the sails and we even tacked the boat for the first time with all the sails. Yes, we’ve owned her for over a year. For some reason we’ve never had all the sails out when the wind would cross the bow (we have jibed and once was not so good). OK, maybe we’ve been a little hesitant. She’s a big boat, with big sails and our kids are pretty young. Now that we’ve tacked her it turns out none of those were good reasons. Since the weather was perfect we launched the dinghy right there near three tree point and Ashley took off to take some gorgeous pictures of Samadhi under full sail. Our cover photo of Samadhi with Mount Rainier is from this day. Once we got some great pictures we continued on to Blake Island. After anchoring we set out to play on the beach. We saw 5-6 orca feeding while at the beach and Dan rescued a kayaker that had overturned her boat with her small dog. We had a nice warm night because… we have HEAT! 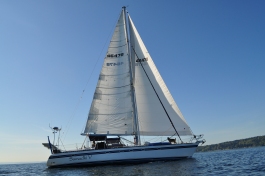 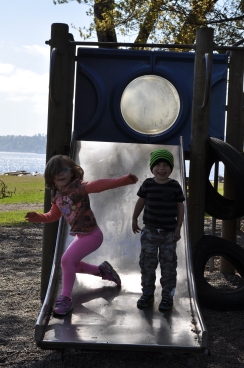